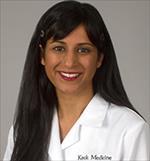 University of California, San Francisco: Chancellor's Award for the Advancement of Women, 2009

"There is such a thing as too many daughters, but not too many sons": A qualitative study of son preference and fetal sex selection among Indian immigrants in the United States Soc Sci Med. 2011 Apr; 72(7):1169-76. . View in PubMed

The ethics of sex selection: a comparison of the attitudes and experiences of primary care physicians and physician providers of clinical sex selection services Fertil Steril. 2010 May 01; 93(7):2107-14. . View in PubMed

Dr. Puri’s research and teaching interests also include clinical ethics. She is a member of Keck Hospital’s Ethics Committee and the Humanities & Ethics Curriculum Committee for the medical school. She teaches Advanced Clinical Ethics to second-year medical students at the Keck School of Medicine. Dr. Puri also writes creative nonfiction, and her work has appeared in the A Piece of My Mind section in the Journal of the American Medical Association, JAMA Internal Medicine, and Slate. She is currently working on an original collection of creative nonfiction essays reflecting on end-of-life care in the United States, one of which will appear in the New York Times in January 2016. In 2015, she was named a finalist for the PEN Center’s Emerging Voices Writers’ Fellowship.