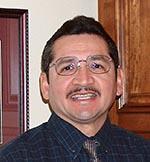 +1 323 226 7923
rjuarez@usc.edu
Dr. Juarez has had a long affiliation with the University of Southern California, which began as an undergraduate and continued through medical school at the Keck School of Medicine, as well as a subsequent internship, residency and fellowship. In 1993, Dr. Juarez joined the faculty as an Assistant Professor of Clinical Medicine, a position he currently holds. Along with considerable academic responsibilities, Dr. Juarez is also the Medical Director of both Bronchoscopy Services and the Medical-Surgical Intensive Care Unit at Keck Hospital of USC.

A distinguished researcher, Dr. Juarez is the Medical Director of several laboratories at USC hospitals, including the Pulmonary Physiology Laboratory, the LAC+USC Sleep Laboratory and the Keck Hospital of USC Pulmonary Function Lab. In addition, he has been the Medical Director of the USC Sleep Diagnostics Program since 1994. Dr. Juarez has also served USC as a leader in other capacities than medicine, such as a former community outreach member for the USC Minorities Affairs Office and the Union President for the LAC+USC Chapter of the Joint Council of Interns and Residents.