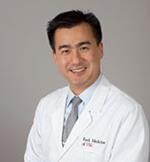 +1 323 442 5988
william.lee@med.usc.edu
Prior to joining Keck’s faculty in 2009, Dr. Lee completed his subspecialty fellowship training at USC and maintains American Board of Surgery certification in Vascular Surgery. He received a Bachelors of Science degree in Biological Sciences in 1998 from Stanford University, and completed his medical degree from the University of Illinois in 2002. Dr. Lee went on to complete his general surgery residency in Boston at the Beth-Israel Deaconess Medical Center in 2007. Dr. Lee has continued refining his surgical skills and knowledge by focusing on venous disorders during a sabbatical at the RANE Center outside of Jackson, Mississippi. He excels in varicose vein ablation, sclerotherapy, microphlebectomy, venous angioplasty and stenting, and open venous reconstruction.