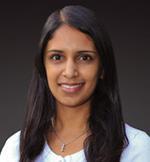 : The John Schoff Millis Award for the Senior with the Best Academic Record in the College of Arts/Sci, 2000

: The Daniel Burke Prize for Excellence in Both Biology and Chemistry, 2000

: The Delta Phi Upsilon Prize of Arts and Sciences, 1999

Evaluation of real-time video from the digital indirect ophthalmoscope for telemedicine consultations in retinopathy of prematurity J Telemed Telecare. 2022 Aug; 28(7):502-507. . View in PubMed

The effects of fetal surgery on retinopathy of prematurity development Ophthalmol Eye Dis. 2009; 1:13-9. . View in PubMed

Sudha Nallasamy, MD, attended the University of Pennsylvania School of Medicine where she was the recipient of the Howard Hughes Medical Institute Medical Student Fellowship Award in 2003, earning her medical degree in 2005. She graduated from the ophthalmology residency program at Children’s Hospital of Philadelphia, Pediatrics in 2009. Dr. Nallasamy further specialized in pediatric ophthalmology and strabismus at the distinguished Children’s Hospital of Boston.